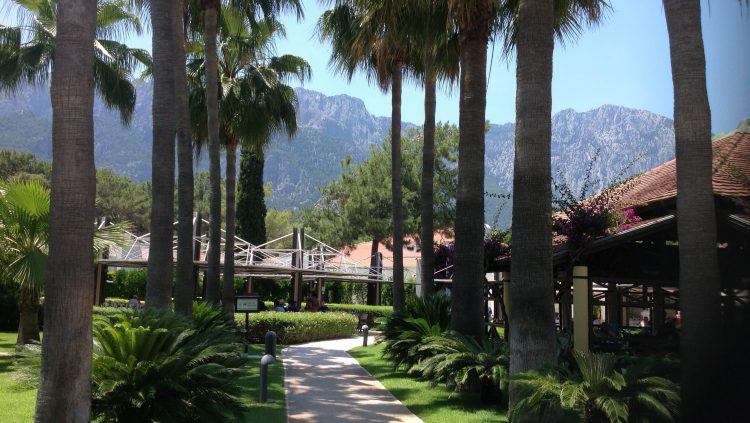 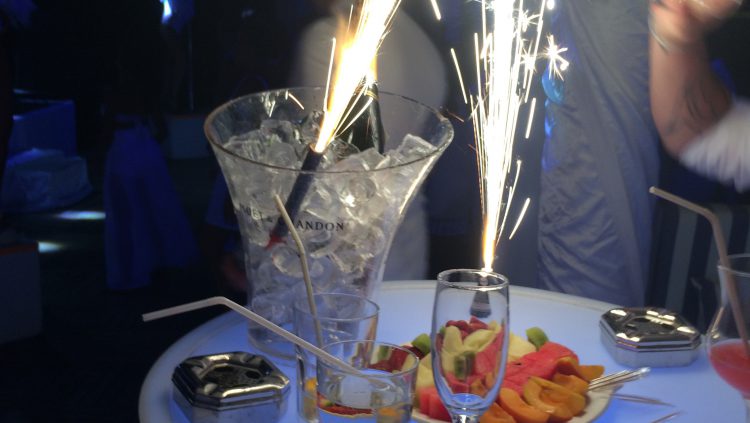 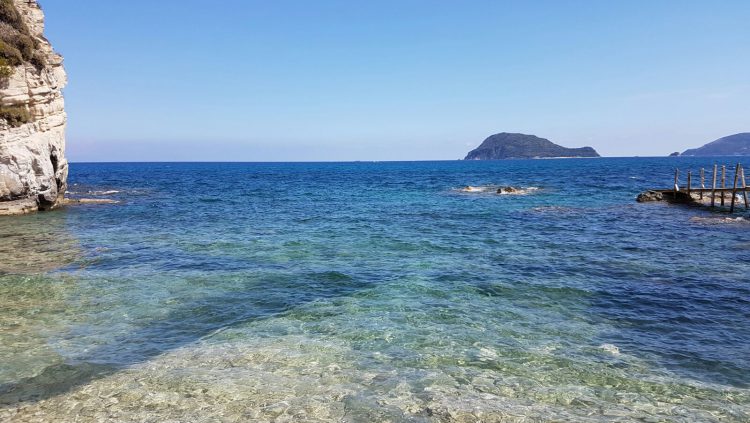 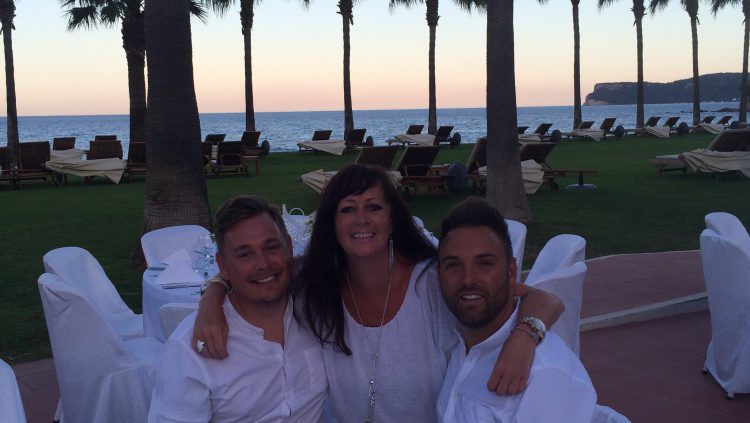 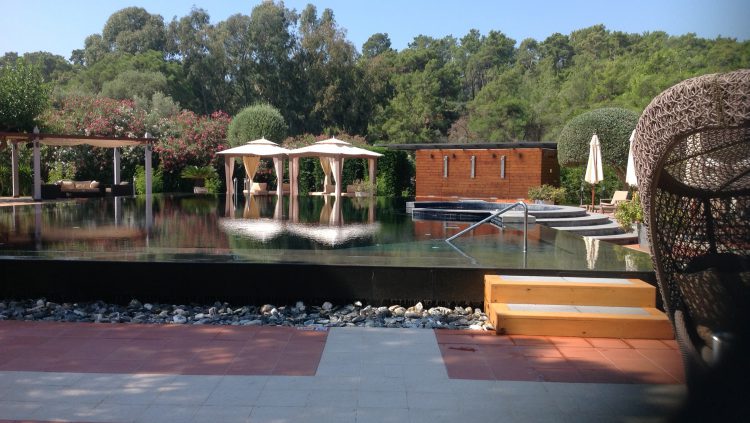 Slept well and they have black out Curtains too so you forget that is morning when you wake up.
Went down for breakfast in the main hotel buffet restaurant. Which opens from 7.30am to 10.45am or you can go to the Bosphore Restaurant for waiter service late breakfast 10.30am to 12pm. There was a very good selection of hot and cold food. Plus a drinks machine for hot drinks. Sat at a table on my own. Wasn’t sure if they would sit me with other people but no I sat very nicely on my own with a view of the pool and sea.
Someone did try to sit at my table but then realised I was there. When I saw her later she said I looked very sophisticated, far too sophisticated to be English! I said she wouldn’t have said that if she’d seen me in the bar last night lol

Went to have a look at the Zen pool in the main hotel. Absolutely stunning but the beds were all in the shade at around 10am so I went round the main hotel pool which faces the sea. It is was a lovely 24 degrees at the start of the trip but towards the end of the week after a day of rain,  it went up to around 36 degrees.

Then lunch at the Olympus Buffett restaurant in the village part of the hotel. Fantastic choice of food – really really impressed. The desserts were so good. Lunch is served here every day from 12.30pm to 02.45pm or you can have a late lunch in the Bosphore Restuarant.

Then we had site inspection of the hotel. It’s such a massive complex. Went to see a suite in the main hotel which has a separate living area and two balconies. Plus a bath and shower in the bathroom

We had a go at tennis and I surprised myself by actually getting the ball over the net!! There are free tennis lessons every day for beginners and intermediate, or you can just  go and use a court whenever you wanted too.

We were then taken to the archery courts – I really enjoyed this but hard work. Managed to hit the board so was quite pleased with myself. Your arm would arm if you did it more than a few times so that’s my excuse for not doing it again. Again you can go along whenever you like to practise and it is all included in the price.

In the evening they always have a dress code which is not compulsory but it adds a nice feel to the evening. Again you can either eat in the main hotel restaurant or you can book a reservation at the Bosphore Restaurant for an a la carte meal, which 4 of us did one night.

Went to the Efes nightclub most nights and it was always busy with guests and GO’s. There was a beach party one night with fires on the beach and dancing.

Went on the snorkelling boat trip from the hotel which is included and goes twice a day at 10am and 3pm. Around a 30 minute journey which was nice and smooth and quite relaxing. Then anchored up for an hour to do snorkelling. The sea was a bit rough so not much to see in terms of fish but it was good to go out and about for a couple of hours.

Ate in the specialty restaurant Bosforus which was really lovely. Had a Turkish mezze and then pumpkin soup – didn’t really taste of pumpkin soup which was good as I don’t actually like pumpkins. Then had shrimps in an asparagus sauce omg they were delicious. Then had beef and roasted vegetables that came out on a steaming hot skillet. Followed by chocolate fondue – the presentation was fabulous with a little spoon shape sprinkled out on the side. The chef came out to see us, to check if we had enjoyed our meal and to find out what the service was like.  It was a nice change from eating in the Buffett restaurant.  We had forgotten to make the reservation so one of the GO’s who we speaking to the previous night in the club booked it for us.

A few of us went into Kemer to watch the football in a local pub. Kemer is lovely with lots of shops and bars with a market once a week. It is a shame it is so quiet as so many tourists are staying away from Turkey.

When we came back to the hotel I noticed how good the security is. You had to walk through a scanner to get back into the hotel if by taxi. If a coach was dropping guests off then they check under the car with mirrors. It is the same at Antalya Airport too the bags go through scanning machines twice and you have to go through two lots of passport control.

On the last night the theme was White night – amazing.  Displays of fruit and vegetables cut out to look like flowers. There was a violin band playing. It looked absolutley stunning. All of the tables had been moved around the pool area and covered with white cloths and white center table decoriations.

Dinner as always was fantastic, I have never stayed anywhere with so much choice of food. They really do work so hard in the kitchens. There is always such an array of desserts on offer, every night I made the decision not to have any until I walked past the dessert table and then of course it would have been rude not too.

We then went down to the Amphtheatre where they have a show every night and we watched the Michael Jackson concert which was the best show I’ve ever seen. Every one singing along and so professional. Again the entertainment staff and GO’s work so hard to put these shows on for people.

As if that wasnt enough we then went to the Efes nightclub and one of the pople on the trip  had booked the VIP area in the club with champagne. It was fabulous and made a real finish to the whole wonderful trip. The club look superb with everyone in the club dressed in white.

Club Med Palmiye is a truly amazing resort and the team of staff from the GO’s to the waiters and chefs are second to none. There are at least 250 GO’s (guest organisers) in the resort.
There is so much included in the price of the holiday with lots of sports and watersports including:

The food is 5* with so much choice and fantastic quality. You get breakfast, lunch, dinner and snacks and a kebab place is open from 10pm to 1.30am

There are 4 pools in total: Two Zen pools, one in the main hotel and the other at the village side. The party pool is in the village, this is where the animation team are based to get people joining into the activities.

You can ask for any drink you want including cocktails (champagne is extra) and if you are in the restaurant and ask for a glass of wine they will bring you the bottle.

The kids club are fantastic and run throughout the day with lots of things to keep the little ones busy.

You can do as little or as much as you want at Club Med Palmiye, the choice is completely up to you.